Here are three more archosaur studs. As before, the final version is subject to change . 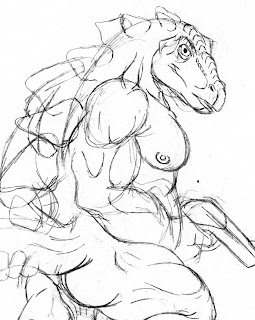 Number four in the list is Maleek, the plateback (Stegosaur) that was a bit of a pest to Grell in the ship's Bridge. I seem to have forgotten the gadget that soldiers are supposed to wear, so it will be added for the final version.
With this image, I tried to deviate a bit from the way I usually draw my characters. He's a bit plump yet muscular. And rather than present him with my usual nearly front view, I had him give a shot of what he's got under that stego tail. Of course, the final version will have a good view of a heavy ballsack and meaty sausage!
Like Zaron before him, Maleek doesn't go for males. To almost all of archosaur society, though, being gay matters as much as the color of someone else's eyes, so folks like Maleek do not mind if other males admire them. Besides, he's sure posing for this project means that there will be some female plateback who will find him desirable. 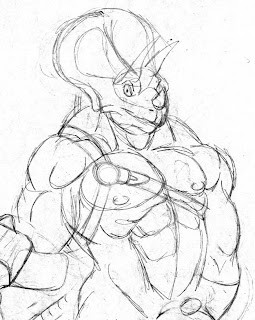 This one is Garios, the Trihorn (Triceratops). This drawing definitely will see more editing -- I have not being able to draw a head that I really like; his left shoulder is lower than the right, and his right arm is rather funky in the way it is holding a gun.
You probably can notice the guy is ambidextrous, though. He's holding another gun in his left hand.

And here's Saresh, the Snoutcrest (Dilophosaurus). He's as much as a slut in "A Path of Thunder" as Brakkus, so I thought it was fitting for him to hold a similar pose with his member fully erect.
Unlike Brakkus, though, Saresh is standing on his feet, legs splayed and crotch forward, blatantly displaying his sex for all the Archosaur Domains to admire (and hopefully to take him in his offer).
Given that he absolutely prefers to take it in the rear, it probably would had made more sense to show him with his tail up and his butt to the viewer, but I prefer this pose for some reason.
There are two more characters for which I already selected a pose, but those are still in an even rougher version than the ones I've shown so far, so I decided not to post them for the time being.
Once I get ten characters sketched, I'll start cleaning up and coloring. That's probably a decent number for the whole project. If there is still time and I still feel like it, I may add a couple more to it.
Posted by Kaa Bakensobek at 8:09:00 PM 2 comments: Links to this post

Bigger, yet not sure if better

So I am minding my own business today at work, doing my usual stuff (and a bit more due to some issue with a system) when my supervisor hinted there could be something big coming my way, and that he would let me in on it later in the day. I didn't give much thought to it until later when he called me and we went to talk in a different room.

He didn't give me any direct indication of what it was, just dropping a few hints until I finally figured out what it was. My initial reaction was in the "Holy shit!" territory, though those weren't the words I used, for obvious reasons.

The work I have done mostly so far goes more or less like this -- a few people at higher or lower than my position (as well as those like me) process the work, and also a second time if the first time it was not resolved to the satisfaction of the submitter. If the second submit fails, it goes to a third, which is the responsibility of only one person. And if that fails, then it goes to a final process, which is also by one person. My new role would be that of the third person in the chain.

Needless to say, I'm freaking out a bit. One thing about some corporations is that they don't want their employees to remain stagnant; they want them to keep advancing. And that is done by taking newer and bigger challenges. So far, I have managed to learn all of the ones I have faced and, despite my initial apprehensions at having yet something else to know and master, have managed to not just do them all, but do them well.

Still, these challenges mean I begin to become more visible. According to my supervisor, the quality of my work has led some higher ups to wonder where I may end up, and what sort of contributions I can give to the company. I am in their eyesights, and not in a negative way. But it makes me nervous; the safety of being surrounded by others doing the same kind of work is evaporating. And some of the easy tasks I had done so well will be taken away from me because my time would be needed for the bigger challenges.

I cannot stagnate. Taking more work is the path for promotion, and better pay.  It is probably natural to feel apprehensive about it. I feel like a deer caught in some headlights. Hopefully, I will turn that into a crocodile whose eyes glow in the dark when light falls on it.
Posted by Kaa Bakensobek at 5:20:00 PM 2 comments: Links to this post

Email ThisBlogThis!Share to TwitterShare to FacebookShare to Pinterest
Labels: work

If you were here to see me start this blog, you'll immediately note I made some big changes in the way it looks. While it certainly looks better (and is more pleasant to the eyes), these changes are far from definite, though. Just like the way my computer desks have been rearranged through time, so will this blog -- one day I'll take the time to move beyond the sample colors and typefaces this thing offers, and maybe add some background image and whatnot.
Now... about our reptilian boys. As you may have read in FurAffinity, I sketched three more saurians to the collection, which now brings the total to four. I am planning on at least ten for the whole folio, but the number may change. It depends on whether I may feel it is a good amount of work. 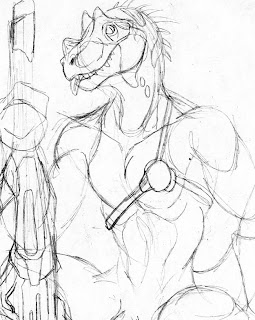 First one is a Snouthorn -- or for those of you who may want to link him to an actual dinosaur, a Ceratosaurus. He's currently unnamed, but that will certainly change by the time I am done. And there are no bigger images linked. Please don't hate me for cropping them, but... hey, a crocodile has to provide only some of the goods if he's to earn a few bucks once the folio is completed.
Sitting on some object, this archosaur seems a bit shy as he opens his legs to offer a clear view of his goods. Perhaps he's wondering what the fuck he was thinking when he accepted the offer to pose nude for everyone in the Archosaur Domains to gaze lustfully at his manliness. For this guy, I intend to come up with some rather vibrant colors and a coloring scheme that may be different from what I may have done in the past.
One thing that will tie all the images together is that dohickey on his chest. That harbors the Patrol insignia, and serves as an identifier to other soldiers. Some will wear on their left, and others on their right -- it is a matter of personal preference for each soldier. 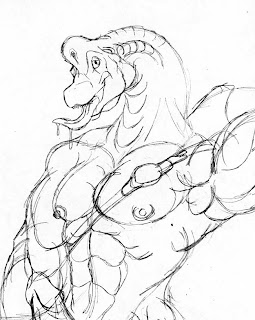 Now this one doesn't need an intro -- you're certainly familiar with Brakkus. Like the snouthorn above, he's also splaying his legs a bit, except that his bits are quite at attention.
I thought he was the perfect character to show two small fetishes of mine -- bulging man pecs (specially when seen from that angle) and a raised arm, giving a clear view of his pit. Don't ask me why, I just like seeing them (but not sniffing; I think that's gross).
And since Brachiosaurs (groundthumpers) were built like giraffes, I thought about giving him a similar long tongue. Hey, the guy is a certified slut. He's got the tools for it. 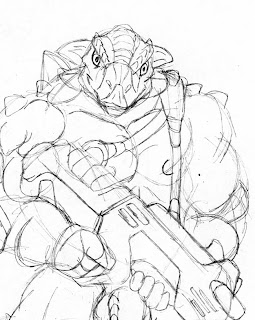 And finally, we have everyone's favorite Armorback (Euoplocephalus). Don't worry, he's also almost completely naked. Well, other than the strap to help him carry that big gun, and him wearing gloves and some armor in his forearms.
I thought about drawing Grell the way I pictured him in the last two chapters of my story "A Path of Thunder".  Other than the lack of armor, of course. He was obviously the best candidate to show in combat gear. Strong and always at the ready, he carries a big gun that sways with each step those stout legs take. And of course, I don't mean the gun in his hands. Duh! XD
I'll follow with more sketches once I get around to create them. I hope this whets your appetite for these beasts and the finished product. I will not be responsible for any humid or torn pants, though.
And please leave me comments. I want to know what I may be doing good, or what to improve. Thankies!

Just a short (and perhaps pointless) entry to note that I just started this thing.